It is imperative now more than ever for us to make sure our liver is in good functioning order. If people truly understood the vital bodily functions their liver performs, they would also understand that a constipated liver that continues on unchecked for several years will lead to immune system disorders, neurological diseases, chronic fatigue, cancers, heart disease, stroke, hypertension, sexual dysfunction, eyesight problems, diabetes, and every digestive disorder from constipation to indigestion. – Ingri Cassel

We are currently living in a toxic world of poisoned air, food and water. In order for your spirit’s vehicle, your body, to not be overwhelmed by the daily toxins our body is continually processing, we must 1) minimize the amount of toxins our body must process, 2) do periodic gallbladder/liver flushes and 3) incorporate fresh-pressed vegetable juices and herbal teas into our daily routine that optimize liver function.

The adult human liver normally weighs between 3.7 – 6 pounds, and is a soft, reddish-brown “boomerang shaped” organ. It is the second largest organ (the skin being the largest organ) and the largest gland within the human body. The liver is considered the most important organ in our body carrying out the most active and extensive operations of our entire anatomy. It is located on the right side at the top of the abdomen behind the diaphragm. The liver lies on the right of the stomach and makes a kind of bed for the gallbladder, where bile is stored (see diagram below).. 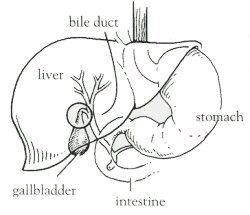 The liver performs a variety of functions. Some of these functions are: To produce substances that break down fats; convert glucose to glycogen, produce urea (the main substance of urine); make certain amino acids (the building blocks of proteins), filter harmful substances from the blood (such as synthetic drugs, pesticides, household chemicals, alcohol, nicotine, caffeine, etc.); storage of vitamins A, D, E and K, folate, vitamin B-12 and minerals such as copper and iron; and maintain a proper level of glucose in the blood.

Hepatic cells or hepatocytes make up about 60 percent of our liver tissue. These specialized liver cells carry out more chemical processes than any other group of cells in our bodies. They change most of the nutrients we consume into forms our body’s cells can use. They convert sugars to glucose and store it as glycogen before converting it back into glucose for releasing into the blood as needed, thereby regulating our blood sugar level.

Other functions of the hepatic cells are to: Produce bile that breaks down fats and produces cholesterol; remove ammonia from your body (converting it into urea for excretion by the kidneys); produce blood proteins, including blood clotting factors; and detoxify our bodies from ingested toxins such as synthetic drugs and alcohol. A second important group of liver cells are the Kupffer cells. They remove damaged red blood cells, neutralize pathogens and clean up debris from dead cells.  Because our liver fulfills so many vital functions, we would die within 24 hours if it stopped working. The most well-known sign of a damaged liver is jaundice, a yellowness of the eyes and skin. This happens when bilirubin, a yellow breakdown product of our red blood cells, builds up in our blood.

However, most people in today’s world suffer from a damaged liver. We have found that by simply doing a seven-day colon cleanse followed by a gallbladder/liver flush and changing one’s diet to one of primarily raw foods consisting of fruits, vegetables, sprouted grains, nuts and seeds that are organically grown (what Dr. John R. Christopher referred to as the mucusless diet), people’s illnesses are reversed.

By understanding how our bodies actually work, we can then understand how our drug-oriented system of medicine suppresses the symptoms of a denatured diet and the resultant accumulation of toxins, overwhelming the liver (and all organs and body systems in the process.)

The late Norman W. Walker wrote a number of books on the value of raw vegetables and fruits, juicing, and colon cleansing. In his book, Colon Health: The Key to A Vibrant Life, he describes the miraculous ability of the liver to convert our food into nutrients and molecules that are utilized for the proper functioning of our bodies. Consider the many atoms that vitamins are composed of. Below are a few, chosen at random:

The vitamin department of the liver cannot utilize any vitamins as whole, composite substances. The nutritional activities of the body do not function this way. The volume of vitamins in grams is so microscopic that only a miraculously intelligent system, working perfectly within the anatomy, could deliver the correct proportions of nutrients to a 150 pound adult or a small child. For example, one pound of peeled bananas contains on an average less than ¼ of a milligram (mg.) of thiamine and only about 0.29 mg. of riboflavin. When we realize that there are 28,350 mg. in one ounce and 453,370 mg. in one pound, we can understand more clearly the amazing chemical factory the liver actually is.

Another example is vitamin K, which is known to prevent hemorrhage among other vital functions. The liver manages to gather 31 carbon atoms, 46 hydrogen atoms and 2 oxygen atoms to form the Vitamin K molecules — thousands of which are needed to prevent one from hemorrhaging. These complex chemical processes stagger the imagination. This is why it is so important to nourish our bodies properly, keep our colons clean and our minds elevated—so our God-given livers will take care of us.

Master Herbalist and Naturopath Dr. Richard Schulze has this to say: “Although your medical doctor would like you to believe that they have figured it out and got it all down, the reality is that your liver is the most metabolically complex organ in the entire human body, more than even your brain. It has numerous different microscopic functional units and is as complex and infinite as outer space. One of the main reasons I know God was a natural healer and NOT a medical doctor is the liver itself. It is so incredibly complex…it’s best to just leave it alone and create a healing lifestyle for it.”

Norman W. Walker believed that the concept of consuming a “complete protein” was based on ignorance of how the liver functions. He describes it this way: “The so-called complete protein must first be emulsified into a heterogeneous mass called chyme and mixed with everything else in the small intestine. In such a state, all molecules in the chyme, whatever they happen to be, are gathered by the villi and passed by the bloodstream to the liver. So what was originally sugar and starch is likewise broken down into their respective molecules and these, in turn, are disintegrated into separate atoms composing them and reassembled to form glucose.”

Norman Walker understood how the body works. He knew that by eating mostly raw vegetables and fruits, nuts, sprouted grains and seeds, and raw vegetable juices, we can get all the vitamins the body needs. Norman Walker never took any vitamins since he found that by keeping his colon clean and eating properly, the atoms needed by the liver to make up whatever vitamins his body required were obtained from the raw foods and juices he consumed. 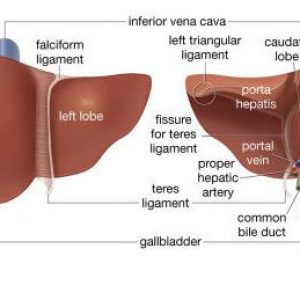 Liver function in our modern world

As mentioned, we live an incredibly toxic world and are being exposed to more deadly chemicals than at anytime in history. Dr. Richard Schulze sees the harm from Americans’ over-consumption of animal sources of protein as a huge factor in the accumulation of toxins. This is because when animal food is digested it forms ammonia, which is absorbed in your intestines and transferred to your blood, and then, hopefully, converted into urea by your liver.

Americans, being the highest consumers of animal food on the planet, have a constant over production of ammonia gas in their intestines. This in turn weakens the liver, being the cause of hepatic coma or paralysis of the liver. High protein fad diets put an incredible amount of stress on our liver. And if you think it is okay to take a couple aspirin now and then for headaches or pain, try this experiment: take two aspirin and place them on a spoon. Hold the spoon over a candle or the stove until the aspirins melt. The resultant smell will be ammonia gas and will tell you how easy it is to over-stress your liver.