You Are What Your Parasites Eat

Most of our digestive complaints can be traced to the presence of worms and parasites in our digestive tract. Parasites enter our bodies from a variety of sources: Pets, food, unwashed hands, etc. Meat consumption is probably the biggest contributor to parasites flourishing in our bodies.

There are a variety of different kinds of parasites, from amoebas, which are microscopic, to tapeworms, ringworms and pinworms, all using our bodies as their host. Having parasites present in our bodies can zap away our vital energy and stamina. Some of the symptoms of having parasites are: Insomnia, teeth grinding or TMJ, constant coughs, itchiness in the anus and ears, and skin diseases such as eczema and acne.

One of the ways we contribute to parasites flourishing in our bodies is by our lifestyle habits, the foods we eat and our personal hygiene. Constipation creates the perfect breeding ground for parasites to thrive. They proliferate in the folds of the colon where much debris is stored. Think about the last time you had pizza – after passing through the stomach and small intestines, it ends up as a paste in the folds of your large intestines. By making sure this debris is thoroughly cleaned out through a colon cleansing program, we can remove the parasites that are feeding on the pastey mass lining the colon walls. Proper colon maintenance will insure that parasites do not return.

My first exposure to the fact that the vast majority of Americans are housing parasites in their bodies was at a Nature’s Sunshine Convention 40 years ago. A woman had actually fished out of the toilet a spidery looking parasite and put it in a quart canning jar preserving it in formaldehyde for all to see. The woman looked healthy enough and, at the time, I realized that I too was probably filled with parasites. After all, my ears tended to itch and I had a recurring rash on my face; definite signs that I would benefit from a colon cleanse with an emphasis on herbs to kill the parasites.

The first time I did a colon cleanse I had a myriad of gnarly looking gunk come out of me. The only parasites I noticed were oval, red colored and white cucumber seed-looking things. Three days into my colon cleanse, all rashes and itchiness vanished. I felt very alive and beaming with lots of good, positive energy.

According to Dr. Hulda Clark, author of the best-selling book “The Cure for All Diseases,” all diseases come from two causes: PARASITES and POLLUTANTS. Her case histories using a battery-operated frequency device she calls the Zapper, coupled with cleansing herbs, a detox regimen and diet, are quite impressive. She has found that propyl alcohol, benzene and wood alcohol (along with toxic metals) are in common household foods and cleaning products. These pollutants accumulate in our bodies, weakening our vital tissues and making a perfect breeding ground for parasites. So, once we eliminate the parasites, it is extremely important to minimize our exposure to these common pollutants so the parasites don’t return.

The most common herbs used to rid the body of parasites are garlic, wormwood, black walnut leaves and husks, fennel, slippery elm bark, tansy, hyssop and green pumpkin seeds. The easiest “to make yourself” blend is also the one Dr. Hulda Clark uses: Wormwood, black walnut husks and cloves – all powdered and put into “00” gelatin or veggie capsules. I usually recommend four capsules/three times a day for a total of 12 capsules a day. This is best done in conjunction with a raw vegetable juice fast and/or colon cleanse.

Many other people have benefited from Pure Planet’s Organic Parasite Cleanse. The reviews from customers are certainly impressive and it is already capped up and easy to use.

For children it is best to put them on a juice fast with the exception of having them eat pumpkin seeds (available at your health food store). Make sure your child’s stools are moving several times a day. This can be done with prune juice or a laxative type tea such as Smooth Move by Traditional Medicinals. One trick Stan Malstrom uses to get a medicinal tea such as Smooth Move or Essiac Tea into children is to put raisins in the tea. The raisins will be plumped up and saturated with the tea. The children can eat all the pumpkin seeds and raisins they want and will be able to eliminate the parasites this way. But for those parents who want a prepared liquid formula for their children that has been tested on many children and works wonders, consider purchasing Dr. Christopher’s Herbal Parasite Syrup.

Quite often when parasites are eliminated from the body they come out as long strings of mucous. This is because the parasites die off and, as the body eliminates them, much of the mucous-appearing material the parasites were feeding on is also eliminated. This mucous can be identified in many cases by the dark streaks and formation of the stool. By paying attention to what you have left in the toilet bowl, you will be able to see the shape of the parasites and worms after they come out. 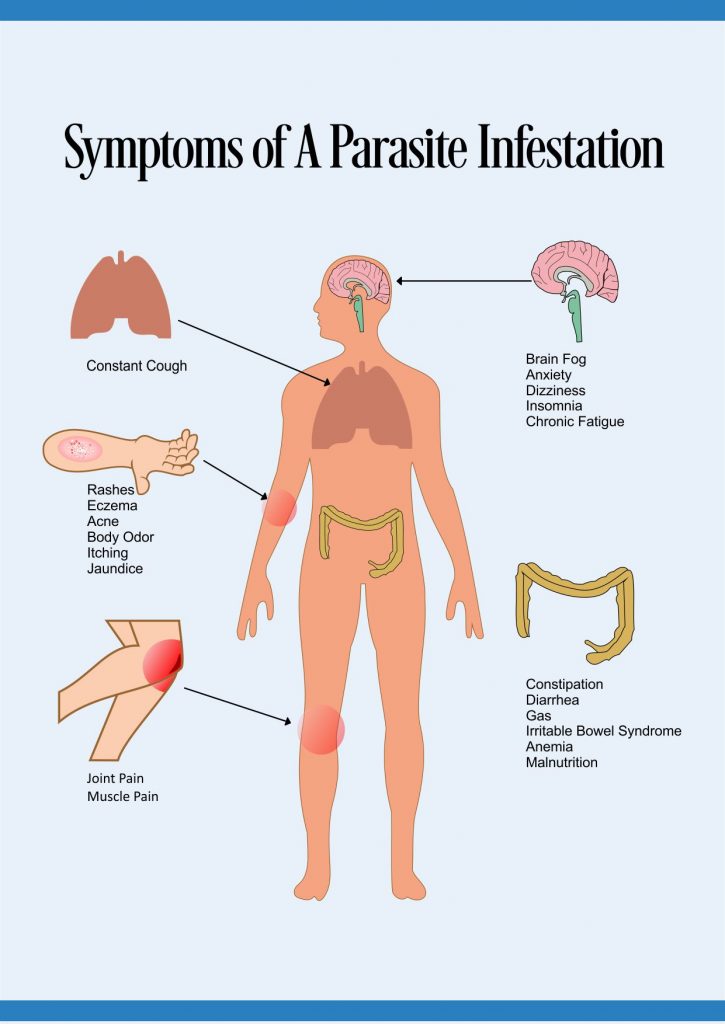 One lady had a very large abdominal area and was constipated for many years. She had gone as long as two to three weeks without having a bowel movement. She had stretch marks on her abdomen like someone who had been carrying a baby for nine months but they were not stretch marks from childbearing.

When she decided to change her diet, eliminating the foods that were feeding the parasites, and began using enemas and herbs to cleanse her colon, she began to pass parasites. She passed parasites daily for over a week the first time she did a proper colon cleanse. Each time she would do her enema, she would find anywhere from a few to a handful in the water she eliminated. She said it looked like a squirming mass, the congestion in her system being so heavy with parasites.

After ridding her body of most of these parasites, she no longer had arthritis, gout and hypoglycemia, diseases she had been treated for but had never recovered from until now.

A friend of mine had been dealing with her children being chronically ill for over a year now. She has never vaccinated them and wanted to treat their ailments naturally but felt at a loss of just what to do. She admitted that she was born and raised on instant, packaged food and canned vegetables. She was doing her best learning to cook from scratch and incorporate a more whole foods-based diet for her family.

She spent the better part of a year seeing nearly every naturopath and holistic practitioner in north Idaho. After her money ran out and her kids weren’t any healthier, she finally responded to what I had been telling her all along: “There are no quick fixes! You must be willing to go on several cleansing regimens, while changing your eating habits 180 degrees.”

She started by taking her oldest boy to see Dr. Carol Geeck, a gifted naturopath and iridologist. After that one visit, she went to work reading books on food combining and ordered some colon cleansing and parasite elimination products for her family.

Dr. Geeck insisted that they start their program as soon as possible and since the boy would be home for the holidays, that would be the best time to start. It was a struggle making it through the holidays without all the usual delectable junk foods, but what her entire family started eliminating in their stools made the process well worth it — poorly timed or not.

She described the various types of parasites each of them were eliminating. Her little girl had pinworms, stringy white ones, and her boy had the cucumber seed-looking ones. Every time they went to the bathroom was an adventure. And they were able to make it through the holidays without getting sick while the rest of the community was plagued with the flu going around.

She is so thankful to have her eyes opened in this way. By taking responsibility for her family’s health, she is no longer a victim that needs to consult with an authority figure (that further disempowered her.) She also commented that the beauty is in the simplicity of it. When we are following the laws of health, there is no longer any mystery in the myriad of ailments plaguing us today. It all comes back to our lifestyle choices and what we choose to put in our mouths.