To boil things down to utter simplicity, there is only ONE DISEASE: CELLULAR MALFUNCTION due to LACK OF OXYGEN ON THE CELLULAR LEVEL!

*Are you getting enough OXYGEN and NUTRIENTS INTO YOUR CELLS?

*Can wastes easily exit your cells? Are you maintaining an optimal pH of 7.35-7.4 in your cells, or are your cells overly acidic which makes you prone to every sort of degenerative disease?

We are only as healthy as our cells, and as we are able to detoxify ourselves. If your cell walls are hard and rigid like in the diagram on the left, only some nutrients and some oxygen can enter the cell, but if your cell walls are soft and permeable, like in the diagram on the right, optimal nutrients and oxygen can EASILY flood into the cells, and wastes can EASILY exit the cells!!

When we’re under stress, we get a huge acid dump into our gut, causing our small intestines to go from neutral to acidic. When cells exist in a low pH or acidic environment, their ability to transport oxygen into their cells and remove toxins becomes impaired. The lack of oxygen creates cellular malfunction and the result is diseases such as cancer. To counteract this problem, start drinking sulfur water twice a day. Back in the 40s and 50s when Big Pharma deliberately broke the sulfur cycle, they KNEW what they were doing! They DELIBERATELY DEMINERALIZED our SOIL by encouraging farmers to stop using MANURE as fertilizer. They told farmers to use synthetic fertilizers instead telling them they’d get increased crop yields, and would therefore make more MONEY.

By stopping the use of manure, Big Pharma broke the sulfur cycle, which made everyone’s cell walls much tougher, blocking nutrients and oxygen from ENTERING the cells, and TRAPPING WASTES INSIDE THE CELLS.

By demineralizing our soil, blocking our access to sulfur and other minerals, Big Pharma radically increased the rate of every sort of degenerative disease, especially CANCER, driving up their PROFITS exponentially! See this graph showing the direct correlation between the demineralization of our soil and the (intentionally created) rise in degenerative disease: 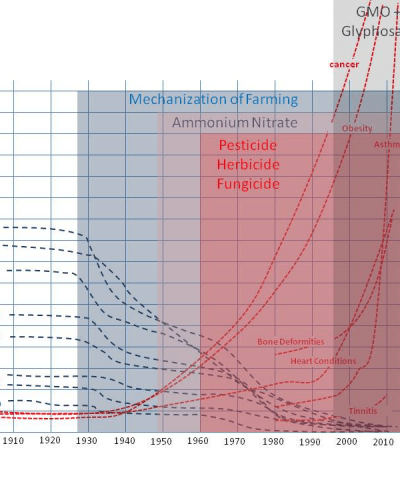 All of our cells are undergoing an unprecedented level of toxic assault from radiation, GMO foods, toxic chemicals the FDA fraudulently allows to be put into our food including herbicides like glyphosate, personal care products and medication and more recently chemtrails that poison our air, water and soil with toxic metals, chemicals and weaponized parasites.

How can we be free to experience optimal health in the face of this onslaught? Glyphosate has been causing a huge increase in autism. Dr. Stephanie Seneff of MIT warns that unless glyphosate (the active ingredient in Monsanto’s “Roundup” is banned, 50% of all children born by 2025 will be born autistic! For Full Article Click Here

Monsanto claims that Roundup is harmless to humans. Bacteria, fungi, algae, and plants use a seven-step metabolic route known as the Shikimate pathway for the biosynthesis of aromatic amino acids. Glyphosate, the active ingredient in Roundup, inhibits this pathway, causing the plant to die, which is why it is so effective as an herbicide. Monsanto says that humans don’t have this Shikimate pathway which is why they can claim Roundup is perfectly safe.

Dr. Seneff points out, however, that our gut bacteria DO have this pathway, and that it is CRUCIAL since those bacteria supply our body with crucial amino acids. Roundup thus kills beneficial gut bacteria, allowing pathogens to grow, and interferes with the synthesis of amino acids including (sulfur based) methionine, which leads to shortages of crucial neurotransmitters and folate, which chelate several important minerals like iron, cobalt and manganese, and much more.

In her article “Impaired Sulfate Metabolism and Epigenetics: Is There a Link in Autism?” Download PDF

Seneff discusses this in-depth: About the role of sulfate in the developing brain, and about how the different sulfur based amino acids such as methionine and glutathione are critical for proper cell signaling. Many children with autism have benefited by taking supplemental sulfur. We should all avoid GMO food like the plague because these GMO plants have absorbed glyphosate, which destroys proper sulfur metabolism.

Sulfur, in the form of Sulfates, plays an important role in cellular detoxification and the normal metabolism of brain neurotransmitters. Sulfur is one of the few antioxidant compounds that can easily cross the blood-brain barrier and repair oxidative damage to neurons and tissues. Sulfur is also essential for the liver to make certain vitamins, like thiamine (Vitamin B1) and biotin, and for producing insulin in the pancreas.

Every cell in our body contains sulfur compounds. Sulfur is found abundantly in soils rich in volcanic basalt and used to be available in eggs, onions, garlic, raspberries, turnips, and cruciferous vegetables like cabbage, broccoli, kale, etc. Unfortunately, our food today is grown in soil that is deficient in trace minerals and sulfur that our bodies needs to build our immunity and repair our bodies.

Since the 1950s commercial farmers have used petroleum-based fertilizers that deplete the sulfur found in our soils. The USDA was aware of the sulfur deficiency in the soils in the southeastern U.S., but nothing was done to reverse this problem. Today, sulfur deficiency has been linked to major diseases like obesity, heart disease, Alzheimer’s and Chronic Fatigue.

In my article, “Organic Sulfur: The Missing Link to Regenerating Cellular Health, Boosting Immunity and Reducing Pain and Inflammation”, (Click Here), you will find maps showing a direct correlation between areas in the country where there is a marked deficiency of sulfur in the soil and all of the diseases listed above.

Our biosphere is being sprayed with billions of metric tones of toxic heavy metals including aluminum oxide, barium, strontium, cobalt, arsenic, toxic chemicals including mycoplasma and ethylene dibromide.

The only way we can protect ourselves is to learn all we can about detoxification using sulfur and other means that you will learn about at Humbleweed.net

SOME THE BENEFITS YOU WILL EXPERIENCE IF YOU DRINK SULFUR WATER TWICE A DAY:

* Radically Increased Energy Level: Sulfur increases the permeability of cell membranes to allow for improved oxygen transport to the cells and improved waste transport from the cells. You must drink it twice a day, once in the morning, and at lunchtime, 1 teaspoon per 100 lbs. of body weight, 1/2 hour away from other supplements or meds, which might deactivate it, but you can take it with other food.

You must hydrate optimally while on sulfur because you’re flushing out toxins. We use the rule of half your body weight in ounces of water per day. So a 200 lb. person would drink about 100 ounces, or a gallon of water per day to flush out the toxins released by the sulfur into the bloodstream so that you don’t have migraine headaches or flu like symptoms (a Herxheimer’s reaction.)

* Reduce Inflammation and Pain: Sulfur is a major antioxidant in the body. It acts as a key sulfur donor to the amino acids methionine and cysteine, thus allowing the formation of glutathione, one of the most powerful anti-oxidants that we produce, and amplifying the effects of other anti-oxidants such as Vitamin C, E, coenzyme Q-10 and selenium. It is no surprise that Dr. Stanley Jacob, MD, discovered amazing wound healing, pain relief, and anti-inflammatory properties in organic sulfur.

* Crow’s Feet and Wrinkles Go away with Silkier Hair: Organic sulfur is essential for building collagen and keratin, essential for healthy hair, skin and nails. Women especially love the glow they achieve and how soft and supple their skin feels as your cells become healthier. We grow a new body every seven years, but its only as healthy as what we put into it. There is NOTHING you can put into your body that is better for your cells than this form of sulfur. Remember, sulfur is a FOOD!

* Improve dental and gum health- You can even brush your teeth and gums with sulfur. Those suffering from gingivitis or severe periodontis have found reduced bleeding and healing of their gums when brushing with sulfur twice daily.

* Healing your gut: Maintaining the proper pH balance within the gut with help from alkalinizing sulfur can help improve the likelihood of creating the protective mucosal lining that creates and environment for your beneficial gut flora to flourish and balance any opportunistic, harmful microorganisms that lead to illness and compromised immunity.

For those suffering from mental illness, we hope that by restoring the balance between the gut flora and the enterocytes in producing the much needed B-vitamins like niacin (vitamin B-3), pyridoxine (vitamin B-6), serotonin, and other enzymes, this will help eliminate the need for mega doses of certain water soluble vitamins that don’t remain in the body.

Too Good to Be True? I recommend that everyone take a flash digital photo of his or her face (without makeup) when starting sulfur. Save it to the hard drive of your computer. Mark your calendar and every month for 6 months take another photo and you will SEE a HUGE improvement in your cellular health.