Cancer has become epidemic in our country with one in three people being diagnosed with some form of it in their lifetime. It has been predicted that cancer will affect one in two Americans this century but from what we are witnessing today, that figure appears to be much higher. The American Cancer Society, the National Institute of Health and the rest of the current medical monopoly tell us they are still searching for a “cure” for cancer despite the fact that many known cures exist that do not employ their current methods of cutting, burning, radiation, toxic chemotherapy and poisonous drugs. Numerous testimonies have been shared by thousands of cancer survivors who have employed non-toxic, non-FDA approved cancer therapies. Instead of taking a serious look at these cases, the FedGov’s agencies have chosen to either ignore these survivors or persecute those offering hope to others. It’s high time for people to wake up to the truth about cancer.

Essiac Tea was formulated by Rene Caisse (pronounced Rene Case), a Canadian nurse who treated cancer victims that the medical establishment had given up on after treating them with chemotherapy, surgery, radiation and pain-killing drugs. Stories of her success with terminal cancer patients, who had been given days to a week or two to live, traveled throughout Canada and the U.S. 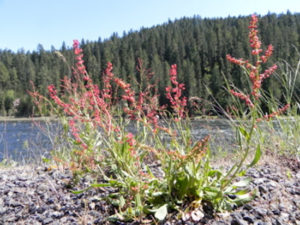 Where did Rene Caisse’s formula come from?

In 1922 Rene Caisse noticed some scar tissue on the breast of an elderly English woman. The woman told her that doctors had diagnosed her as having advanced breast cancer 30 years ago. However, the woman didn’t want to risk surgery nor did she have the money for it. She told Caisse that she had met an old Indian medicine man in the 1890s who told her of an herbal tea that could cure her cancer. The woman took the medicine man’s advice and was still alive to share with Rene Caisse the herbal remedy he had given her.

About a year later, Rene Caisse was walking with a retired doctor friend in his garden when he pointed to a common weed and stated, “Nurse Caisse, if people would use this weed there would be little or no cancer in the world.” When he told her the name of the plant, she recognized it as one of the herbs the English woman had named as an ingredient of the Indian medicine man’s tea. That herb happens to be sheep sorrel, a common garden weed.

In 1924, Rene Caisse found out that her aunt was diagnosed with stomach cancer with some liver involvement and was given at the most six months to live. She asked the doctor for permission to try the herbal concoction for the first time on her aunt since they had nothing else to offer her. He consented under his supervision and Caisse obtained the necessary herbs to make up the tea. After treating her aunt with the tea, she lived another 21 years and never had a recurrence of cancer.

When Caisse’s own mother was diagnosed with inoperable liver cancer at the age of 72 and given only days to live, Rene gave her the tea and she lived another 18 years.

Soon after that, her aunt’s doctor and their friends who had ‘hopeless’ cancer patients were referred to Rene Caisse. In 1934, after many trials and tribulations (including threats to arrest her for practicing medicine without a license), she opened a ‘Cancer Clinic’ in her hometown of Bracebridge, Ontario on donations, helping hundreds of patients who had cancer either recover or live longer and without the agonizing pain associated with chemotherapy, radiation and constant pain-killing drugs.

What are the herbs in Rene Caisse’s formula?

After many trials with the eight-herb formula given by the Indian medicine man, Caisse narrowed her own formula down to four herbs in specific proportions, adding other herbs based upon the patient’s ailments. She called her herbal formula Essiac, her surname spelled backwards. Although she kept her formula a guarded secret, Mary McPherson, who worked closely with Rene Caisse for many years, submitted a sworn affidavit of the exact formula and how to prepare it after Rene Caisse passed in 1978. The four herbs are burdock root, sheep sorrel (the entire plant including the roots), turkey rhubarb and slippery elm inner bark.

Once the formula was released, there has been a growing interest in commercializing Essiac Tea, with one man attempting to copyright the name Essiac. This is an affront to the memory of Rene Caisse who intended Essiac to be a gift to the world. All of the herbs are easy to grow and reputable herb companies sell most of the four herbs. However, sheep sorrel root is not sold commercially and is essential to the original formula. Rene Caisse herself would increase the proportion of sheep sorrel root in the tea for patients who were in an advanced stage of cancer.

So why is sheep sorrel root so difficult to obtain? Sheep sorrel’s roots are normally small and spindly; it takes cultivating the sheep sorrel in a rich mulch augmented with minerals to get a substantial amount of root into the formula. After nurturing a small patch of sheep sorrel in my yard and then witnessing an acre of sheep sorrel growing in a rich mulch south of Spirit Lake, I was convinced that I would rather take advantage of this man’s expertise and become a distributor of his brand of Essiac herb tea since it was clear he had the experience of creating a superior product. After sharing this fabulous tea with many friends and drinking it daily myself, we have all witnessed vast improvements in our health from better digestion to creaking joints being alleviated. We have found it to also help with diabetes, arthritis, skin cancers, asthma and emphysema.

Thankfully, all four herbs in the formula grow throughout North America and can be cultivated in your own backyard making it impossible for the profitable cancer industry to stop people from learning about it and growing their own supply.

In Dr. Gary Glum’s book, Calling of an Angel, he stated the following:

“I don’t claim that Essiac is a miraculous panacea, capable of curing all cancers in all people, nor do I believe that. Rene Caisse didn’t even believe that. She didn’t claim Essiac as a ‘cure for cancer.’ Her former patients were the ones who put forward that claim, strenuously and over many decades. What Rene maintained was that Essiac caused regression in some cancerous tumors, the total destruction of others, prolonged life in most cases and—in virtually every case—significantly diminished the pain and suffering of cancer patients.

“If the testimonials of Rene’s former patients, including those sworn under oath, have any credibility at all—and when I present them, I think you’ll agree they do—then Essiac’s powers as a pain reliever in cancer patients are nothing short of phenomenal. In sixty years of personal accounts, the easing of agony and an increased sense of well being—often to the point of getting through the day without narcotics—is one of the predominant themes. You hear it over and over again, and always told with a deep sense of gratitude.

“Rene fought almost her whole adult life against overwhelming odds and under incredible pressures, some of them self-imposed, to establish those simple facts as accepted wisdom. She never gave up her fight. But for one woman many years ago to persuade the medical and legal institutions of North America that a natural treatment for cancer—based on herbs that grow wild —might make more sense than the accepted means of surgery, radiation and chemotherapy…. she might as well have been telling them in an earlier century that the earth is round.”

3. The Complete Essiac Essentials by Sheila Snow and Mali Klein